Can't find what you are looking for? Try a search!
Home » Remedies » C » Chamomilla 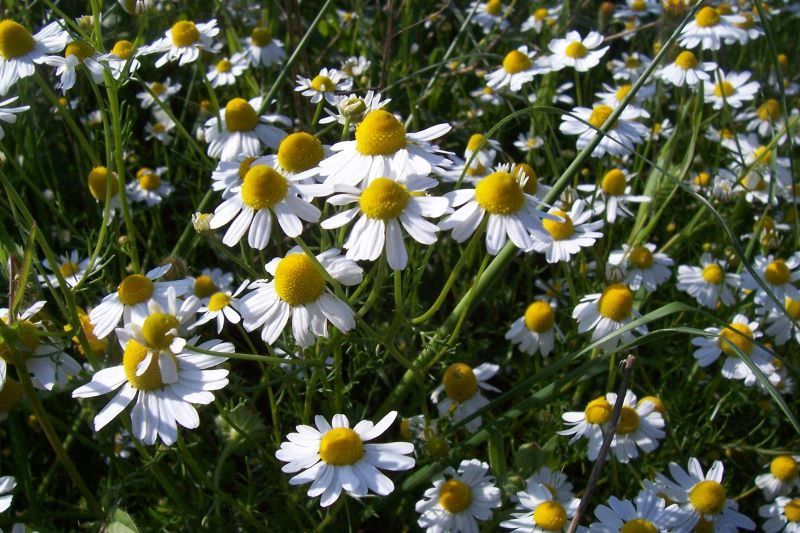 Chamomilla is the homeopathic remedy name for the herb corn feverfew and is part of the Compositae family. It is also known as matricaria chamomilla and German chamomille. It is used primarily for child-birth and teething but is useful for so much more. It is another must have in your homeopathic first aid kit.

Chamomilla is an excellent remedy for the teething baby, a woman in labour or insomnia. Anger is a main focal point with this remedy and any symptoms resulting from anger should be compared to the list below.

It is very useful in cases where the child is irritable or an adult has unbearable pain. A baby that insists on being carried around but who will cry loudly if held still is a good candidate for this remedy.

Chamomilla is commonly used for:

Cough: Where the cough is dry during sleep, tickling, irritating and mucus tastes bitter. Cough tends to be worse at night and most common in children.

Diarrhea: Where it is painful, stools are greenish and smell of rotten eggs and is common in teething children.

Earache: Where the pains are aching, pressing, stitching, tearing or unbearable and it is worse for bending down and for wind.

Fever: Where the heat is burning and one-sided and is accompanied with both thirstiness and shivering. Tends to be worse around mid-morning and is a result of anger. This type of fever is where the face is hot, as is the breath but the body will be chilly/cold. Face can sweat after the person eats.

Flatulence: When the stomach tends to be bloated.

Insomnia: When accompanied with sleepiness. Insomnia can be a result of pain, stimulants such as tea/coffee, anger, or too much chamomilla tea – this includes in the case of babies. This can also occur in people who are restless.

Joint pain: Where the pain is violent and tends to be accompanied by numbness. The pain can cause person to get out of bed during the night, as walking around eases it a little.

Labour pains: Where the pains are distressing and severe, to unbearable. This is when the person says things like they cannot bear the pain and they want to die. Can be very angry and impatient while cervix could be slow to dilate.

Period problems: Where the period is painful and the blood is clotted. Anger is an issue here and periods could be more frequent or even earlier than usual as a result of getting angry.

Teething: Where it is painful in children and the cheeks are hot and red; pale and cold; red spots on one cheek. Again, pains will be unbearable and the child will cry out in sleep. This is also used in cares where sleep is restless, they have diarrhea and also green stools. It tends to be worse when in a hot bed, on having warm foods or drinks and for any pressure. Child could potentially have one red/hot cheek or a patchy cheek and one pale cold one.

Toothache: In children where pain is unbearable and it is worse when given warm drinks/food or for pressure or, as mentioned above, warmth in bed. Chewing anything will make it much worse, as it hurts. A cough or diarrhea may accompany but not in all cases.

Vomiting: Where being sick is easy and you bring up bile. This type of sickness will be brought about by anger.

Where to buy Chamomilla 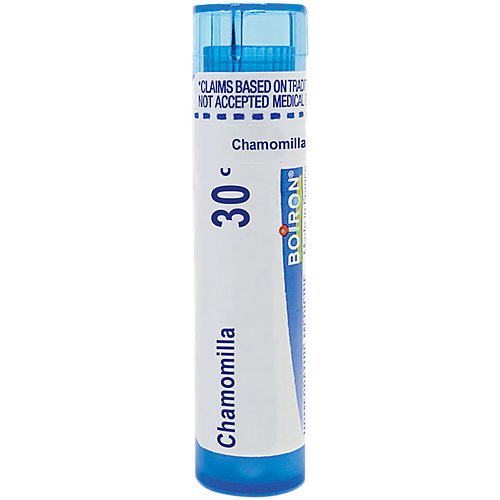 Those who have a low threshold for pain may find that Chamomilla works quite well as a homeopathic remedy. They may feel irritable and hostile, or even just struggle to cope with anger. They generally hate being touched and have a bad temper. They exhibit stress if they have any sort of invasion of their space or interference with their symptoms. It is often given to children who appear to be snappy, and who exhibit similar traits as those described in adults.

Children: Useful for teething with irritability, pain, diarrhea. Colic, earache. Overly sensitive to illness and pain. Snappy and contrary, yet likes being carried. Child feels hot, is worse with heat and in the evening up to midnight. When ill, one cheek is red and hot, the other cheek seems paler and cool.

Earache: Helpful for earache with pain that seems unbearable. Worse with heat. Ears feel as if they are plugged up

Female: Useful for females with menses that are clotted, dark blood. Pains are cramping, colicky. Pain extends to thighs, back and chest. Breast are tender, swollen. pain is intolerable.

Fever: Helpful for fever with irritable, ugly temper, cantankerous, can’t be pleased. One cheek is red and hot, the other pale and cold.

Mental: Useful for impatient, restless, irritable, snappish mental states. Whining, moaning when they don’t get their way. Child can only be quieted when carried or held. Extremely sensitive to pain, wants relief NOW. Angry, especially if spoken to or looked at. Asks for things, then refuses them. Impatient, Angry.

Pain: Beneficial for intolerance of pain, fainting and/or sweating from pain

Toothache: Helpful for teething when cold relieves pain. Teething with diarrhea. One cheek red and hot, the other pale and cool. Dental pain.