Can't find what you are looking for? Try a search!
Home » Remedies » P » Phosphorus 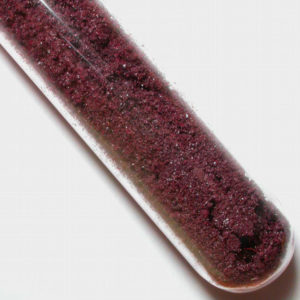 The Homeopathic Remedy Phosphorus (Phos.) is derived from the chemical element phosphorus. It is used for some digestive conditions, but also a range of other common ailments such as coughs, headaches, heavy hair loss and bleeding but is useful for so much more.

Phosphorus is very common in the body, found in the bones, teeth, DNA and body fluids, and happens to be a vital mineral required for life.

This remedy is suitable for personality types ranging from those who are sometimes anxious or nervous to those who are usually energetic, open, and sociable.

Phosphorus is another first aid kit must have.

Phosphorus is commonly used for:

Phosphorus works quite well in curing anxiety and fear in and of itself. It can also be quite useful for other symptoms that may be associated with either anxiety or fear such as insomnia, exhaustion, or even nervous tension. Phosphorus has gained much attention as a homeopathic remedy as it helps to solve both mental and emotional issues, as well as the physical symptoms that can be related with them.

Any sort of bleeding can be easily cured by turning to phosphorus as a homeopathic remedy. It helps by getting to the root cause of the problem and allowing the body to naturally heal whatever is leading to the bleeding gums, chronic bloody nose, heavy menstrual flow, or even bleeding from the stomach lining.

Phosphorus provides a great deal of relief, no matter what type of bleeding one is suffering from. It may also prove to be helpful for any sort of circulatory problems, such as excessive cold extremities.

Though they may be rather temporary in nature, that doesn’t mean that they are any less frustrating and that’s where phosphorus comes in. When suffering from the stomach flu, food poisoning, or general nausea and/or vomiting due to food aversion or other temporary reasons, phosphorus can work wonders.

When an individual suffers from respiratory issues that result in tightness in the chest and difficulty in breathing, then phosphorus may work efficiently as a homeopathic remedy. Respiratory problems such as asthma, bronchitis, or pneumonia can be cured much faster using phosphorus.

Any sort of ailment or health condition that has a burning pain associated with it may be helped by phosphorus. This homeopathic remedy goes to work on the problem and allows this debilitating pain to subside much faster.

Phosphorus is an effictive homeopathic remedy for stimulating hair growth. If clumps of hair are list from some parts of the head, then phosphorus helps in regenrating hair at those areas also. This remedy is recommended to those people who mostly go through hair loss due to dandruff or minor skin disorders.

Where to buy Phosphorus 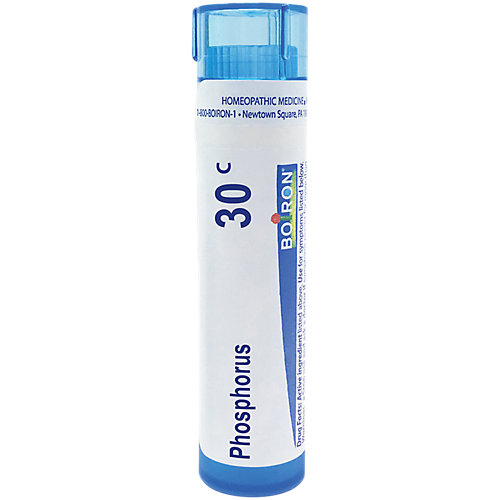 This remedy is suitable for personality types ranging from those who are sometimes anxious or nervous to those who are usually energetic, open, and sociable.

Generally those which benefit most from phosphorus homeopathy tend to be outgoing and rather charismatic individuals. They are often quite creative and imaginative, and very much enjoy being the center of attention. They don’t really like to be alone and therefore do very well being surrounded by family and close friends. If they are upset by something, they like to be showered with a great deal of sympathy and attention.

Mind: Great lowness of spirits. Easily vexed. Fearfulness, as if something were creeping out of every corner. Clairvoyant state. Great tendency to start. Over-sensitive to external impressions. Loss of memory. Memory. Paralysis of the insane. Ecstasy. Dread of death when alone. Brain feels tired. Insanity, with an exaggerated idea of one’s own importance. Excitable, produces heat all over. Restless, fidgety. Hypo-sensitive, indifferent.

Head: Vertigo of the aged, after rising (Bry). Heat comes from spine. Neuralgia; parts must be kept warm. Burning pains. Chronic congestion of head. Brain-fag, with coldness of occiput. Vertigo, with faintness. Skin of forehead feels too tight. Itching of scalp, dandruff, falling out of hair in large bunches.

Eyes: Cataract. Sensation as if everything were covered with a mist or veil, or dust, or something pulled tightly over eyes. Black points seem to float before the eyes. Patient sees better by shading eyes with hand. Fatigue of eyes and head even without much use of eyes. Green halo about the candlelight (Osmium). Letters appear red. Atrophy of optic nerve. Œdema of lids and about e eyes. Pearly white conjunctiva and long curved lashes. Partial loss of vision from abuse of tobacco (Nux) Pain in orbital bones. Paresis of extrinsic muscles. Diplopia, due to deviation of the visual axis. Amaurosis from sexual excess. Glaucoma. Thrombosis of retinal vessels and degenerative changes in retinal cells. Degenerative changes where soreness and curved lines are seen in old people. Retinal trouble with lights and hallucination of vision.

Stomach: Hunger soon after eating. Sour taste and sour eructations after every meal. Belching large quantities of wind, after eating. Throws up ingesta by the mouthfuls. Vomiting; water is thrown up as soon as it gets warm in the stomach. Post-operative vomiting. Cardiac opening seems contracted, too narrow; the food scarcely swallowed, comes up again (Bry; Alum). Pain in stomach; relieved by cold food, ices. Region of stomach painful to touch, or on walking. Inflammation of stomach, with burning extending to throat and bowels. Bad effects of eating too much salt.

Respiratory: Hoarseness; worse evenings. Larynx very painful. Clergyman’s sore throat; violent tickling in larynx while speaking. Aphonia, worse evenings, with rawness. Cannot talk on account of pain in larynx. Cough from tickling in throat; worse, cold air, reading, laughing, talking, from going from warm room into cold air. Sweetish taste while coughing. Hard, dry, tight, racking cough. Congestion of lungs. Burning pains, heat and oppression of chest. Tightness across chest; great weight on chest. Sharp stitches in chest; respiration quickened, oppressed. Much heat in chest. Pneumonia, with oppression; worse, lying on left side. Whole body trembles, with cough. Sputa rusty, blood-colored, or purulent. Tuberculosis in tall, rapidly-growing young people. Do not give it too low or too frequently here, it may but hasten the destructive degeneration of tubercular masses. Repeated hæmoptysis (Acal). Pain in throat on coughing. Nervous coughs provoked by strong odors, entrance of a stranger; worse in the presence of strangers; worse lying upon left side; in cold room.

Back: Burning in back; pain as if broken. Heat between the shoulder-blades. Weak spine.

Extremities: Ascending sensory and motor paralysis from ends of fingers and toes. Stitches in elbow and shoulder joints. Burning of feet. Weakness and trembling, from every exertion. Can scarcely hold anything with his hands. Tibia inflamed and becomes necrosed. Arms and hands become numb. Can lie only on right side. Post-diphtheritic paralysis, with formication of hands and feet. Joints suddenly give way.

Skin: Wounds bleed very much, even if small; they heal and break out again. Jaundice. Little ulcer outside of large ones. Petechiæ. Ecchymosis. Purpura hæmorrhagia. Scurvy. Fungous hematodes and excrescences.

Modalities: Worse, touch; physical or mental exertion; twilight; warm food or drink; change of weather, from getting wet in hot weather; evening; lying on left or painful side; during a thunder-storm; ascending stairs. Better, in dark, lying on right side, cold food; cold; open air; washing with col water; sleep.