Can't find what you are looking for? Try a search!
Home » Ailments » Acne » Pulsatilla Nigricans 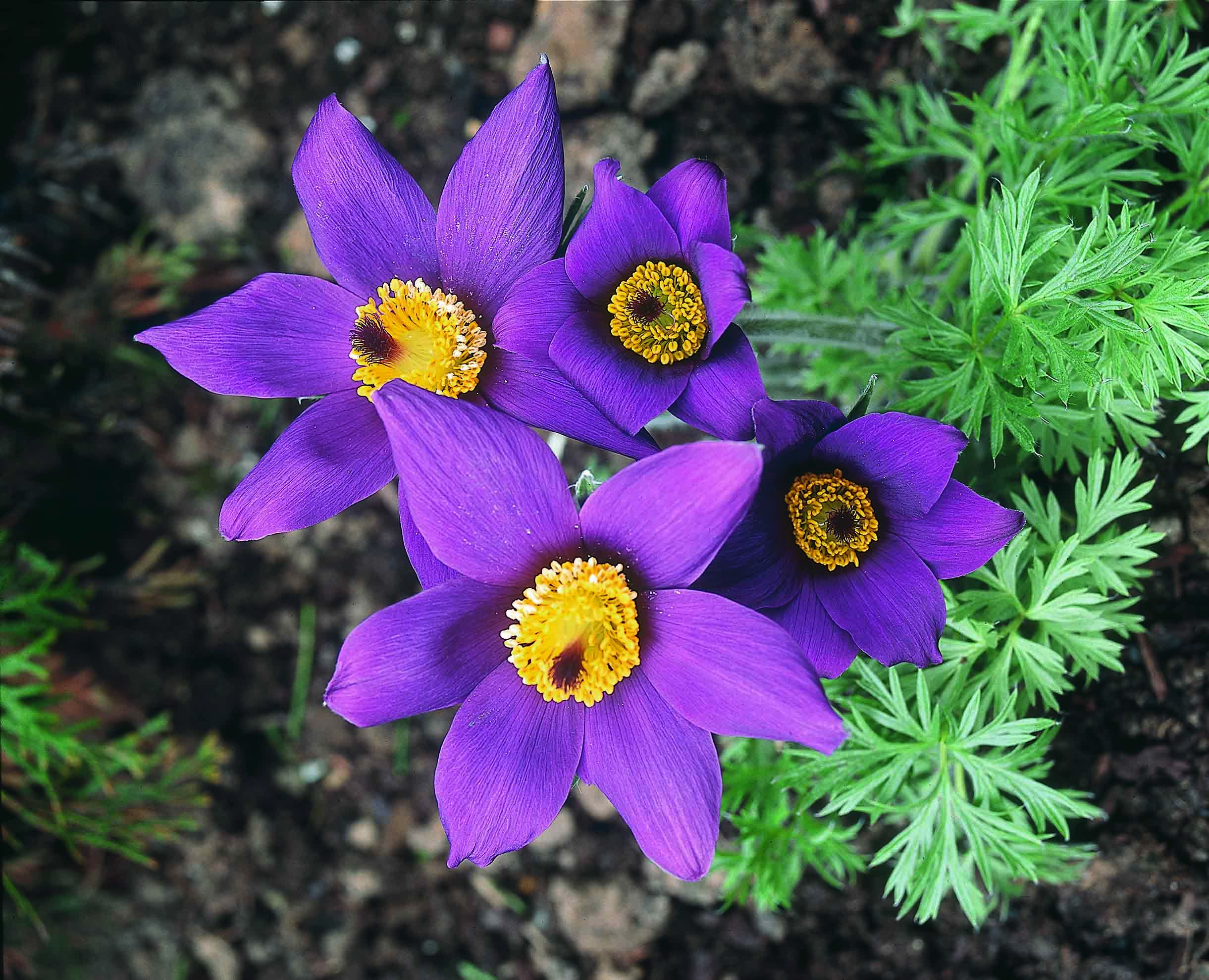 The Homeopathic Remedy Pulsatilla is good for where people have painful indigestion, rumbling gas, bitter belching and heartburn. It can also be used for car and motion sickness, especially if the window must come down to let in fresh air.

For girls and women, Pulsatilla addresses the whole range of hormonal issues from PMS to hot flashes. Its PMS is full of cramps, dull aching pain and milky discharge with back pain before typically late irregular periods. It can be critical to young girls weakened by puberty.

Other uses for pulsatilla are shifting leg pains and swollen joints; sleepiness during the day, and anxious restless dreams at night; eye irritation with thick discharge and inflamed eyelids; ear pain and congestion; and acne in young girls.

Pulsatilla is commonly used for:

Used for the type of cold where the individual feels really sick. They tend to have a blocked nose with very thick and dark mucous that may even show up as a bloody nose. There is often a reduced sense of taste and a very wet type of cough associated with this cold. Pulsatilla works best as a homeopathic remedy where violent coughing episodes are quite common and where the mucous seems to almost overtake the body.

Many people turn to pulsatilla when faced with a yellow catarrh and terrible headaches associated with this type of sinusitis. The symptoms include sharp pains on the face with tenderness that may be unbearable. This homeopathic remedy can help when the individual feels watery discharge from the eyes and an inability to breathe properly.

This is the type of eye infection where discharge, that is often green in color, is literally oozing from the eye. Pulsatilla may work well as a homeopathic remedy for conjunctivitis and itchy styes specifically, though it can help with any sort of sensitivity or related symptoms.

Any type of issues associated with an abnormal or interrupted menstrual cycle or flow can be helped tremendously with the homeopathic remedy of pulsatilla. If there is abnormal or infrequent menstrual cycles, or if there are extreme symptoms such as severe premenstrual symptoms or even mood swings, this homeopathic remedy may be helpful. In addition, pulsatilla helps with morning sickness and other similar and common symptoms of pregnancy which can be difficult to deal with.

There is always a wide range of symptoms that one may suffer when it comes to digestive disorders. Turning to pulsatilla as a homeopathic remedy may work best for symptoms such as indigestion, nausea, diarrhea, and even itchy or painful hemorrhoids.

Where to buy Pulsatilla 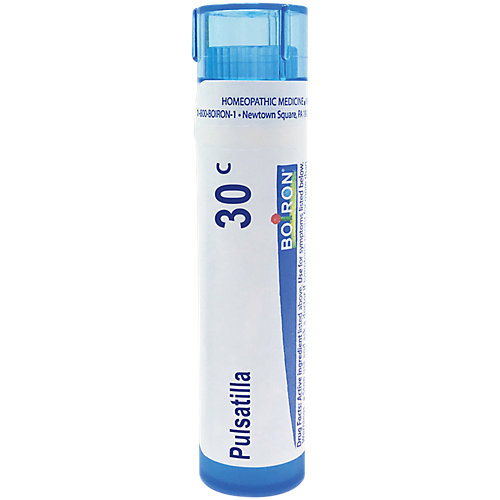 The type of person that benefits the most from using the homeopathic remedy of pulsatilla tends to be very compliant, calm, and good natured. Though they are often fairly calm in their nature, they tend to have frequent mood swings that can come out of nowhere. They like attention and the spotlight, and they frequently crave sympathy when the situation warrants it. Their physical and emotional symptoms may come on quickly and commonly leave just as quickly, often without any warning. They may have a wide range of physical problems, and therefore can benefit from the healing powers of a versatile homeopathic remedy such as pulsatilla.

Mind: Weeps easily. Timid, irresolute. Fears in evening to be alone, dark, ghost. Likes sympathy. Children like fuss and caresses. Easily discouraged. Morbid dread of the opposite sex. Religious melancholy. Given to extremes of pleasure and pain. Highly emotional. Mentally, an April day.

Ears: Sensation as if something were being forced outward. Hearing difficult, as if the ear were stuffed. Otorrhœa. Thick, bland discharge; offensive odor. External ear swollen and red. Catarrhal otitis. Otalgia, worse at night. Diminishes acuteness of hearing.

Face: Right-sided neuralgia, with profuse lachrymation. Swelling of lower lip, which is cracked in middle. Prosopalgia towards evening till midnight; chilly, with pain.

Stomach: Averse to fat food, warm food, and drink. Eructations; taste of food remains a long time; after ices, fruits, pasty. Bitter taste, diminished taste of all food. Pain as from subcutaneous ulceration. Flatulence. Dislikes butter (Sang). Heartburn. Dyspepsia, with great tightness after a meal; must loosen clothing. Thirstlessness, with nearly all complaints. Vomiting of food eaten long before. Pain in stomach an hour after eating (Nux). Weight as from a stone, especially in morning on awakening. Gnawing, hungry feeling (Abies c). Perceptible pulsation in pit of stomach (Asaf). All-gone sensation, especially in tea drinkers. Waterbrash, with foul taste in the morning.

Abdomen: Painful, distended; loud rumbling. Pressure as from a stone. Colic, with chilliness in evening.

Urine: Increased desire; worse when lying down. Burning in orifice of urethra during and after micturition. Involuntary micturition at night, while coughing or passing flatus. After urinating, spasmodic pain in bladder.

Respiratory: Capricious hoarseness; comes and goes. Dry cough in evening and at night; must sit up in bed to get relief; and loose cough in the morning, with copious mucous expectoration. Pressure upon the chest and soreness. Great soreness of epigastrium. Urine emitted with cough (Caust). Pain as from ulcer in middle of chest. Expectoration bland, thick, bitter, greenish. Short breath, anxiety, and palpitation when lying on left side (Phos). Smothering sensation on lying down.

Back: Shooting pain in the nape and back, between shoulders; in sacrum after sitting.

Fever: Chilliness, even in warm room, without thirst. Chilly with pains, in spots, worse evening. Chill about 4 pm. Intolerable burning heat at night, with distended veins; heat in parts of body, coldness in other. One-sided sweat; pains during sweat. External heat is intolerable, veins are distended. During apyrexia, headache, diarrhœa, loss of appetite, nausea.

Modalities: Worse, from heat, rich fat food, after eating, towards evening, warm room, lying on left or on painless side when allowing feet to hang down. Better, open air, motion, cold applications, cold food and drinks, though not thirsty.