Can't find what you are looking for? Try a search!
Home » Ailments » Aches & Pains » Staphysagria 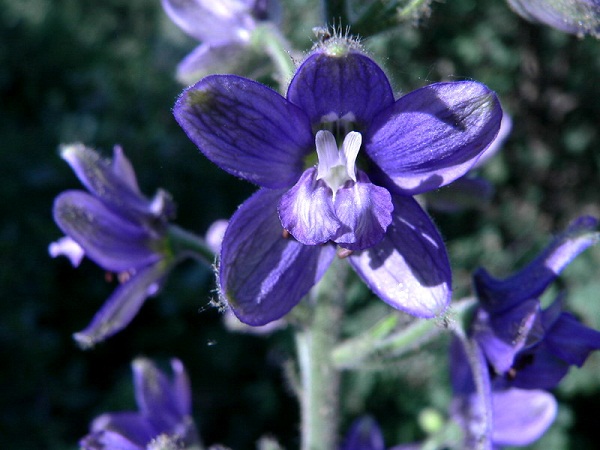 The homeopathic remedy Staphysagria is a wonderful remedy for emotional health. Staphisagria is prepared from the seeds of the plant, and suits those who are mild, submissive and suppress their emotions. Staphysagria is helpful for emotional recovery from traumatic events and can be used to help post traumatic stress disorders, PTSD, anxiety, depression, suppressed anger.

Staphisagria is also one of the best remedies for incised wounds (wounds with straight, clean edges). It stimulates healing and relieves pain, even in old scars of incised wounds.

Staphysagria helps with physical symptoms with an affinity for the teeth, skin and eyes, and can be used externally to relieve eyelid inflammation and sties. It is also often listed for help in recurring head lice.

Staphysagria is commonly used for:

Staphysagria is considered very effective for the treatment of symptoms related to emotional health, especially following a traumatic event. Anything from anxiety to stress and depression is thought to have been alleviated by the use of this homeopathic remedy.

This is often the type of joint pain that shows up as bruised, sore, immobile, or weakened limbs. A neurological pain such as that which presents itself in the right shoulder, for example, may be commonly associated with this type of condition. However this pain presents itself, turning to staphysagria as a homeopathic remedy may be quite helpful.

There are a variety of different skin conditions that one may suffer from, but in this instance they are pretty distinct in their appearance. The skin is easily infected and tends to be very slow to heal. It generally looks unhealthy and may be accompanied by scars or frequent cuts. These are all common conditions for which somebody would look to staphysagria as a homeopathic remedy.

This particular type of headache is where the individual feels as though a heavy object is sitting on top of their head. The headache may be accompanied by a numbing sensation, and there is often dizziness that increases when the individual lies down.

In this instance, the individual may have great difficulty falling to sleep. They may feel that as tired as they are, they just can’t fall asleep. When this type of chronic insomnia is present, staphysagria may work wonders as a homeopathic remedy to help the individual fall into a deep type of sleep that is necessary for the body to function properly.

This is a rather extreme type of toothache that may very well be caused by decay or excessive plaque that has formed in the mouth. With this toothache, and the related symptoms, the individual may feel as though the pain is worse when it is touched. If these symptoms sound familiar, then staphysagria may be recommended as a homeopathic remedy.

Where to buy Staphysagria 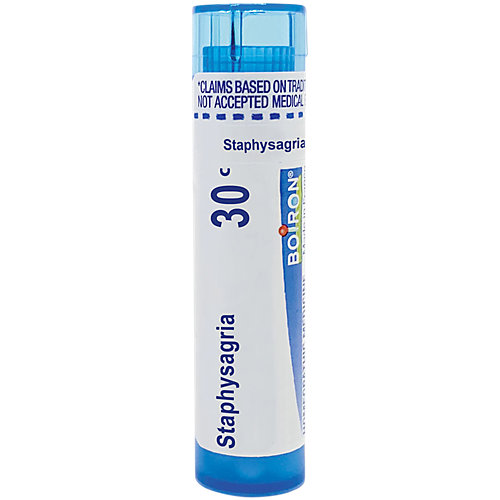 Though they may seem mild on the surface, these people tend to have deeply rooted emotions. They harbor rage for a variety of reasons, though the outside world may not see that surface often. They tend to be very sensitive to insults and any type of rude behavior. They have a deep fear of losing control and therefore try to maintain it at all times. They may wreak of rotten eggs, as this smell may filter out from their stools and even sweat. Confrontation is difficult but when they do become angry they are likely to tremble, choke on swallowing, stammer, or throw things. Someone in a Staphisagria state feels worse after an afternoon nap, is prone to sexual fantasies, cystitis and styes.

Mind: Impetuous, violent outbursts of passion, hypochondriacal, sad. Very sensitive as to what others say about her. Dwells on sexual matters; prefers solitude. Peevish. Child cries for many things, and refuses them when offered.

Head: Stupefying headache; passes off with yawning. Brain feels squeezed. Sensation of a ball of lead in forehead. Itching eruption above and behind ears (Oleand).

Throat: Stitches flying to the ear on swallowing, especially left.

Urinary: Cystocele (locally and internally). Cystitis in lying-in patients. Ineffectual urging to urinate in newly married women. Pressure upon bladder; feels as if it did not empty. Sensation as if a drop of urine were rolling continuously along the channel. Burning in urethra during micturition. Prostatic troubles; frequent urination, burning in urethra when not urinating (Thuja; Sabal; Ferr pic). Urging and pain after urinating. Pain after lithotomy.