Can't find what you are looking for? Try a search!
Home » Remedies » Thuja Occidentalis

Within the world of homeopathy, Thuja is known to be one of the remedies that is recommended to be on hand for a practitioner because of its probable use.

People who require this remedy may be emotional, opinionated, and irritable. Symptoms are better from rubbing and pressure, and worse at night.

Thuja Occidentalis is commonly used for:

Thuja is best known for its ability to treat skin symptoms which include warts, oily skin, dry skin, sensitive or itchy eruptions, nail fungus and hemorrhoids.

The type of warts that Thuja is beneficial for are the type that can be very large and known as “cauliflower warts”. Thuja works to help the body rid itself of the scaly patches that appear, as well as the itchy skin and even brown “age spots” that people tend to complain of.

Thuja may work as a homeopathic remedy for a number of menstrual problems. When the menstrual periods are scant or too early, or when there is extreme pain over the left ovary specifically, then this is when thuja is recommended.

Though it is common, it may be hard to detect at first. The urethra is swollen and inflamed with this type of condition, and the urine stream is weak and seems almost split. There is a frequent urge to urinate and infection is prevalent when either a man or a woman suffers from this type of problem. As gonorrhea may be an associated condition, thuja may be given to help with that problem as well.

Not only is the type of headache that thuja may help rather specific, but so too is the type of pain that is suffered. This is a headache that is often caused by stress, exhaustion, or even overexcitement. The pain is piercing and is most likely related to infected sinus or even tooth problems.

Individuals who tend to suffer from chronic respiratory or sinus problems may turn to thuja. The catarrh can be foul smelling and is often green or yellow. There is commonly bloody mucus or nasal polyps associated with this type of condition.

Where to buy Thuja Occidentalis 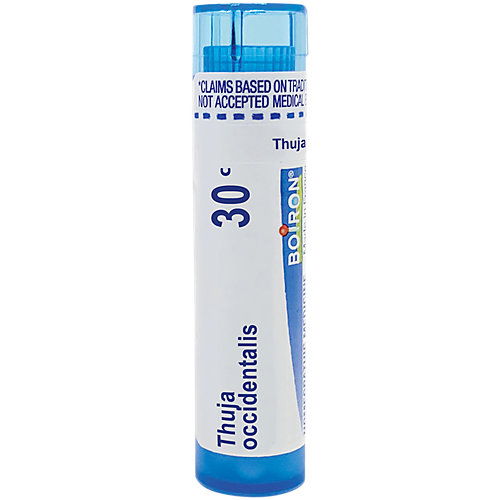 The people that respond well to thuja as a homeopathic remedy tend to be very sensitive, and sensitive to music (weeping with church music), very serious, and often feel that they are not lovable at all.

They put on a good front to the outside world, but they are rather unhappy and negative deep down. They may suffer from serious delusions about their appearance and also from feelings or ideas of paranoia that are hard for them to dismiss. They feel very frail, lack concern for personal appearance or cleanliness and may project a feeling of incompetence or ugliness.

Mind: Fixed ideas, as if a strange person were at his side; as if soul and body were separated; as if something alive in abdomen (Croc). Emotional sensitiveness; music causes weeping and trembling.

Extremities: When walking, limbs feel as if made of wood or glass, and would break easily. Tips of fingers swollen, red, feel read. Muscular twitchings, weakness and trembling. Cracking in joints. Pain in heels and tendo-Achilles. Nails brittle. Ingrowing toe nail.

Fever: Chill, beginning in thighs. Sweat only on uncovered parts, or all over except head, when sleeping; profuse, sour, smelling like honey. Orgasm of blood in the evening, with throbbing in the blood-vessels.

Modalities: Worse, at night, from heat of bed; at 3 am and 3 pm; from cold, damp air; after breakfast; fat, coffee; vaccination. Better, left side; while drawing up a limb.